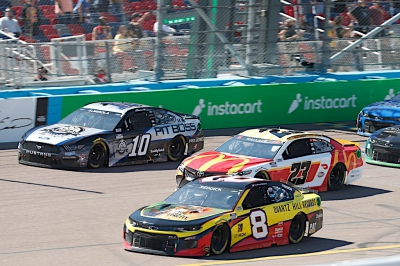 ● Overall, Almirola noted that the balance was good but that slight adjustments were needed during the lap-30 competition caution.

● During a caution on lap 46, Almirola said the balance of his Pit Boss Grills Ford was headed in the right direction.

● Almirola restarted 12th. He was caught in traffic that pushed him back to 17th but rallied back to 13th while passing cars with fresher tires.

● He pitted at the end of the stage for four fresh tires, fuel and more air pressure adjustments.

● After green-flag pit stops cycled through, Almirola was scored in the 10th position.

● The No. 10 Pit Boss driver raced to 14th before pitting under green on lap 251 for four fresh tires and fuel.

● Just when green-flag pit stops cycled through, the caution was thrown with Almirola in 11th.

● The No. 10 team pitted under caution for four fresh tires and fuel. He came off pit road 10th.

● After pitting during a caution on lap 284 for four fresh tires and fuel, he came off pit road in ninth for the lap-288 restart.

● The Pit Boss Grills Ford driver was involved in a threewide battle for seventh place on the restart, but he ran out of room and was forced to run the bottom line. Almirola’s racecar was tight racing in that line, and it cost him two positions. He held onto 11th from there to the checkered flag.

● Almirola earned his first top-12 of the season and his eighth in 21 career NASCAR Cup Series starts at Phoenix.

● This was Almirola’s third straight top-15 at Phoenix.

● Martin Truex Jr. won the Instacart 500k to score his 28th career NASCAR Cup Series victory, his first of the season and his first at Phoenix. His margin over second-place Joey Logano was 1.698 seconds.

● There were seven caution periods for a total of 45 laps.

● Twenty-four of the 38 drivers in the race finished on the lead lap.

● Denny Hamlin remains the championship leader after Phoenix with a 39-point advantage over second-place Brad Keselowski.

“Finally, a solid day. Proud of my team. We ran in the top-10 most of the day and had a really good Pit Boss Grills Ford on the longer runs. And then there at the end it turned out to be two short runs. All in all, a great day, turned all the bad races around and almost got a top-10. Thanks so much to Pit Boss Grills and representing the Pro Series on the car. That was fun to run up front, be competitive and get out of here with a solid finish. We made some hay and a little ground on the points situation, and we’re going to have a lot better starting spot and pit selection going to Atlanta. We’ll keep this momentum going next week, where we’re running another Pit Boss Grills Ford.”

The next event on the NASCAR Cup Series schedule is the Folds of Honor 500 on Sunday, March 21, at Atlanta Motor Speedway. The race begins at 3 p.m. EDT with live coverage provided by FOX and SiriusXM NASCAR Radio.