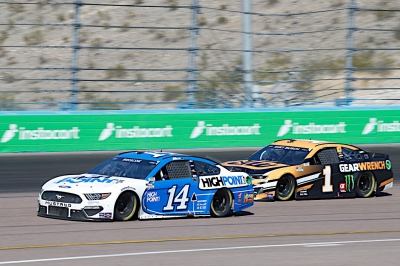 ●  The HighPoint.com driver spent the first 15 laps of the race in the top-20 but began to fall back as his Ford Mustang became too loose on entry in turns one and two.

●  During the lap-30 competition caution, Briscoe pitted for four tires, fuel and a slight adjustment to help with his edginess on entry. He restarted from the 21st position on lap 37.

●  The second yellow flag of the race was shown on lap 47. Briscoe stayed on track while some of the leaders pitted, and he restarted 18th on lap 51.

●  After contact on the restart, Briscoe fell back as far as 28th before advancing to 26th before the end of the stage.

●  The No. 14 HighPoint.com team pitted at the stage break for four tires, fuel and a track bar adjustment.

●  The No. 14 HighPoint.com Ford Mustang was 22nd when a caution occurred early in the stage on lap 90. Briscoe was happy with the handling of his car, so the team pitted for four tires and fuel on lap 92.

●  The race returned to green with Briscoe lined up 26th for the restart.

●  Briscoe advanced to the 14th position before green-flag stops began on lap 140, when he also reported his HighPoint.com Ford Mustang was building tight in the center of the corner.

●  On lap 143, Briscoe gave up the second position to make his scheduled green-flag pit stop. He received four tires, fuel and adjustments, but a slow stop placed Briscoe in 24th when he returned to the track.

●  Briscoe worked his way back to the 17th spot before the end of the second stage.

●  At the Stage 2 break, the No. 14 team gave Briscoe four tires and fuel and made wedge and air pressure adjustments to help the HighPoint.com Ford Mustang roll the center better.

●  The HighPoint.com driver was running ninth before making a scheduled pit stop under green on lap 251. He pitted for four tires, fuel and adjustments to loosen up the No. 14 Ford Mustang, but Briscoe returned to the track outside the top-20 after another slow stop.

●  The sixth yellow flag of the race was shown on lap 263 while Briscoe was running 21st. He pitted for four tires and fuel and restarted 23rd with 44 laps remaining.

●  Briscoe made his final pit stop under caution on lap 284 for four tires, fuel and a track bar adjustment to free up the HighPoint.com Mustang.

●  The race resumed with 25 laps remaining, and Briscoe briefly ran in the top-20 but ultimately crossed the finish line 22nd.

●  Martin Truex Jr., won the Instacart 500k to score his 28th career NASCAR Cup Series victory, his first of the season and his first at Phoenix. His margin over second-place Joey Logano was 1.698 seconds.

●  There were seven caution periods for a total of 45 laps.

●  Twenty-four of the 38 drivers in the race finished on the lead lap.

●  Denny Hamlin remains the championship leader after Phoenix with a 39-point advantage over second-place Brad Keselowski.

“The results don’t show how strong our HighPoint.com Ford Mustang was today. We have a lot we need to work on, but to run up front for a while in the final stage was really encouraging. We drove from the back to the top-10 twice, but problems with the pit guns and jack on our stops really held us back from the finish we deserved. We’ve just got to stay patient and focused, and we’ll have a race where it all comes together soon enough.”

The next event on the NASCAR Cup Series schedule is the Folds of Honor 500 on Sunday, March 21, at Atlanta Motor Speedway. The race begins at 3 p.m. EDT with live coverage provided by FOX and SiriusXM NASCAR Radio.