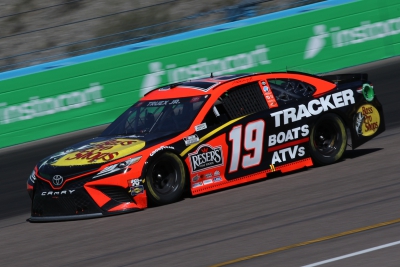 After 312 miles in Phoenix, it was ultimately Martin Truex Jr. who led a total of 39 laps en route to his first career win at Phoenix and his twenty-eighth career win overall. Of course, the win also advances him into the NASCAR Cup Series playoffs. Truex is no stranger to the playoffs, as he won the championship in 2017. Notably, Truex’s victory marks the fifth different winner in the first five races of the season.

“I’m kinda speechless. This feels pretty amazing. Phoenix has been a tough one for us. I wish it was November, but hopefully we will be back here in November,” Truex Jr. told FOX Sports’ Jamie Little.

At the opening of stage one, it was Brad Keselowski who led the field to green, after winning the pole based on NASCAR’s formula system. Keselowski held the first place position until Denny Hamlin passed him for the lead within a few laps. The race continued under green until the competition caution on lap 30. Another yellow flag appeared shortly after on lap 47 for Alex Bowman. Ross Chastain, who was ahead of Bowman at the time, checked up causing Alex Bowman to be spun from behind by Austin Dillon. The rest of the stage continued under green until Lap 75 marked the end of stage one. At this time, it was Ryan Blaney who led the field to capture the stage win.

Lap 15 of the second stage brought the next yellow flag. This time it was for Anthony Alfredo, who was spun by Cody Ware. Following this, the remainder of stage two carried on under green. After 190 laps of competition, the second stage came to a close with Joey Logano gaining his first stage win of the season.

Trouble for Tyler Reddick brought out the sixth caution of the day with only 51 laps to go. Lap 282 saw the last yellow flag of the race for Kyle Busch. Busch spun with some help from Ross Chastain.

As Truex ultimately grabbed the checkered flag, runner-up Logano trailed by 1.698 seconds. The remainder of the top-five consisted of Hamlin, Keselowski, and Chase Elliott.

The NASCAR Cup Series will be back in action next Sunday at Atlanta Motor Speedway. Be sure to tune into FOX at 3 PM ET on March 21 to catch all of the action.