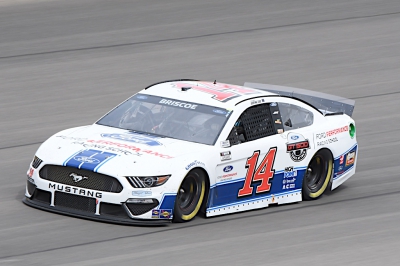 ● The Ford Performance Racing School driver reported on lap 10 that his Ford Mustang was really tight on exit as he ran in the 26th position.

● When the yellow flag was shown for the first time on lap 27, Briscoe said the No. 14 had started to build free on exit. The team pitted for four tires, fuel and adjustments to help with handling early in the run. He restarted 19th but slipped back to 25th on lap 42.

● Briscoe pitted from the 25th position on lap 48 for tires, fuel and a track bar adjustment. The No. 14 had to restart at the tail end of the longest line in 30th after being penalized during the pit stop.

● At the end of Stage 1, Briscoe reported that his Ford Performance Racing School Mustang was turning better. He pitted under the caution for four tires, fuel and a wedge adjustment.

● After beginning the stage in 18th, Briscoe dropped as far back as 28th before beginning to work his way forward. He was 25th before green-flag stops began on lap 122.

● Briscoe made his scheduled green-flag pit stop from the 10th position on lap 125. The No. 14 team gave him four tires, fuel and a chassis adjustment to free up the Ford Performance Racing School Mustang on exit, and he returned to the track in the 29th position.

● On lap 150, Briscoe moved into the 23rd position and reported he had no side bite at all.

● At the end of Stage 2, Briscoe was scored one lap down and pitted for four tires, fuel and a chassis adjustment for the Ford Performance Racing School Mustang. He pitted a second time to repair damage to the left-front fender that was the result of contact with another team’s tire when making his previous stop. He lined up 29th, one lap down, for the start of the final stage.

● The Ford Performance Racing School driver wheeled his way into the Lucky Dog position on the lap-168 restart, signaling the beginning of the final stage, and was able to get back on the lead lap when the fifth caution of the race occurred on lap 171.

● Under the caution, Briscoe pitted for four tires and fuel, and lined up 26th for the restart on lap 174.

● The yellow flag waved again on lap 180, and the No. 14 team elected not to pit. The Ford Performance Racing School Mustang lined up 15th for the restart.

● On lap 215 while running 22nd, Briscoe reported he was too tight on corner entry through exit.

● Briscoe made his final scheduled green-flag pit stop from the ninth position on lap 225. The No. 14 team gave him four tires, fuel and a slight chassis adjustment.

● He crossed the line 21st at the finish.

● Briscoe has five NASCAR Xfinity Series starts at Las Vegas and swept the series’ slate of races in 2020.

● Kyle Larson won the Las Vegas 400 to score his seventh career NASCAR Cup Series victory and his first at Las Vegas. His margin over second-place Brad Keselowski was 3.156 seconds.

● There were six caution periods for a total of 30 laps.

● Denny Hamlin remains the championship leader after Las Vegas with a 38-point advantage over second-place Keselowski.

“It felt like every race so far I’ve learned a ton just throughout the race. Obviously I wish I could start the race kind of where I end, knowing what I need from a speed standpoint. I feel like I learned a lot today, and hopefully when we come back here it’ll help. It’s just hard with no practice to show up and go, but I feel like we made gains on it, and right now I feel that’s the most important thing.”

The next event on the NASCAR Cup Series schedule is the Instacart 500k on Sunday, March 14, at Phoenix Raceway. The race begins at 3:30 p.m. EDT with live coverage provided by FOX and SiriusXM NASCAR Radio.