As Ryan Blaney and the No. 21 Motorcraft/Quick Lane team head to Charlotte Motor Speedway to continue their participation in the Monster Energy Cup playoffs, their thoughts and prayers are with the family and friends of the late Robert Yates. 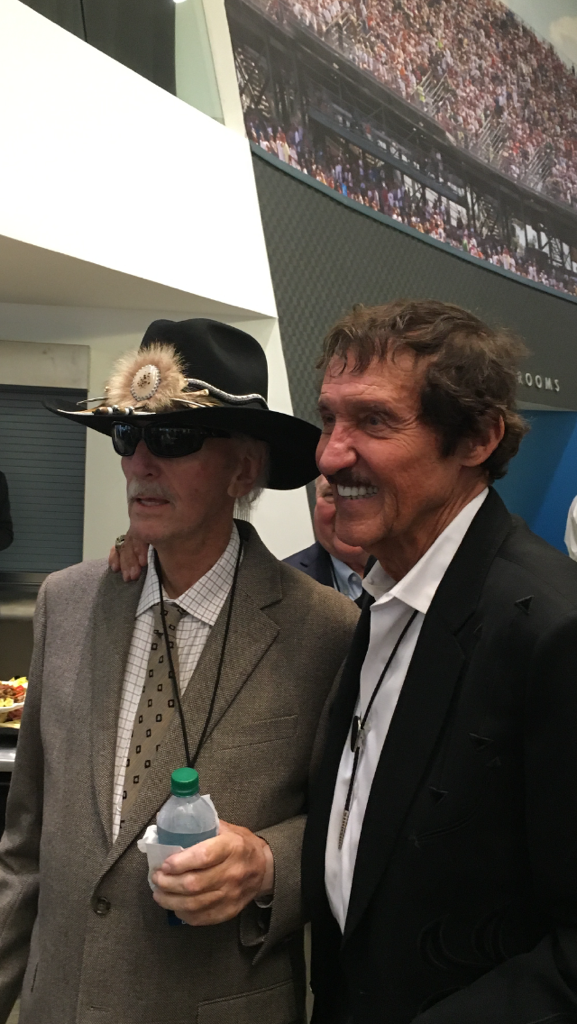 Yates, known throughout the sport as the King of Horsepower, died Monday at the age of 74 after a battle with cancer.

Like many in the garage, especially those who campaign under the Ford Motor Company banner, the Wood Brothers and their Motorcraft/Quick Lane team have long considered Yates a member of their racing family.

For the Wood Brothers, the connection is especially close. Yates built engines for the team in the late 1960s and early 1970s, and the company he built, Roush Yates Racing Engines, now provides the power for the No. 21 Fusion along with every other team that represents the Blue Oval in NASCAR’s top three divisions.

Len Wood, co-owner of the Motorcraft/Quick Lane Fusion, said Yates played a major role in the No. 21’s history over the years.

“Robert built engines for us way back when, and the engines we run today come from the company he founded,” Wood said. “We look at him and his son Doug as being on our team.”

Wood said the first time he met Yates, he came away impressed. The Woods had gone to Charlotte to look at some property and wound up at the engine shop operated by Parky Nall. Yates was working for Nall at the time.

“Robert was standing beside an engine he’d built, with one hand on it, looking like he was really proud of it,” Wood said. “The first thing I noticed was that the valve springs had little yellow stripes on them, and the stripes were all lined up.

“I remember thinking: ‘This guy really knows what he’s doing.’”

Once, while Len, his brother Eddie and some younger members of the team were struggling to get an engine started at the track, Yates initially watched from a distance.

Once he’d sized up the situation, he came over and offered his advice.

“He said to put a new fuel pump on it,” Len Wood said. “It had a new pump on it, but we did what Robert said, put another one on it and it fired right up.”

Wood said his team wasn’t the only recipient of a helping hand from Robert Yates. “He helped a lot of people.”

In the early 1990s, Yates had been experimenting with different angles for engine valves and had gotten a big horsepower advantage over the competition, including his fellow Ford teams.

“We were pulling 635 horsepower, and we were hearing that Robert’s engines were said to have 700,” Wood said. “It was hard to believe at the time.”

NASCAR officials decided that Yates had to share his technology with the other Ford teams or lose the right to use it themselves.

The Woods and the other Ford teams got a set of Yates’ cylinder heads along with recommendations on other components like camshafts and pistons, as well as advice on how to get the most speed from them.

When the Woods made their first dynamometer test of the Yates-designed engine, their horsepower jumped from 635 to 660. A second engine, with more refinements, pulled 675. A third delivered 690 horsepower.

It was that third engine that Dale Jarrett used to score his first Cup victory, at Michigan International Speedway on Aug. 18, 1991.

And the car and driver he beat that day was none other than the No. 28 Ford owned by Robert Yates and driven by Davey Allison.

Eight years later, Jarrett won the Cup championship, capitalizing on the power under the hood of the Yates-owned No. 88 Ford.

Wood pointed out that while Yates had great success on the track, he also dealt with difficult situations over the years. But he didn’t let them get him down.

There was the death of his star driver Davey Allison, followed by serious injuries to Ernie Irvan, who took over the No. 28 after Allison died.

“Both of those tragedies would have broken a normal man, but Robert bounced back,” Wood said. “Even the cancer didn’t break him.”

Wood said he and his brother Eddie visited Yates at his farm in April. They rode around in Yates’ pickup as he showed them fields he’d cleared and other improvements he’d made to the property.

“We were with him for about two hours,” Wood said. “We spent about an hour and a half talking about the farm, and we talked about the race we’d just run and about engines he built back in the day.

“He spent maybe five minutes talking about the cancer.”

Yates’ time on earth is over, but his place in NASCAR history and in Wood Brothers history is secure, as team co-owner Eddie Wood said.

“He will be a part of our family forever,” Wood said.

The No. 21 Motorcraft/Quick Lane Fusion will carry a special decal honoring Yates this weekend at Charlotte Motor Speedway.

Qualifying for the Bank of America 500 is set for Friday at 7:20 p.m., and the race is scheduled to start just after 2 p.m. on Sunday with TV coverage on NBC.

Rate this item
(0 votes)
Tweet
« Almirola will Race in the Daytime in Charlotte's Fall Race Statement from Mars Wrigley Confectionery U.S. on the Passing of Robert Yates »