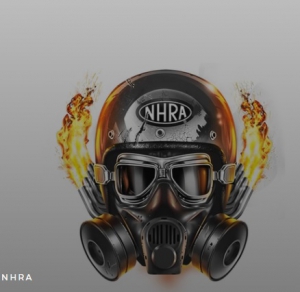 Thursday, Mar 25
NHRA has partnered with Keyscaper for a collection of NHRA-branded electronic accessories. The licensing partnership was secured by JRL Group, NHRA’s licensing agency.
Diehard race fans will now be able to proudly show off their passion for NHRA Drag Racing with a wide selection of cellphone cases, chargers, keyboards, and more. With something for fans of all ages, the initial launch of the collection will include four designs: the iconic NHRA logo, known and beloved by all fans; NHRA Originals, a style that taps into the vintage, nostalgic feel of the brand; Hot Rod, which takes a more contemporary spin; and Game Face, a raw and gritty take on the sport’s trademark elements of speed and power.
Racing aficionados can rest easy knowing all products are fully-functional and useful in their everyday lives. Cell phone cases are available for both iPhone and Galaxy models, and wireless USB chargers that can be slipped into bags or set up in cars make it easy to charge devices on the go, and in style.
The NHRA Licensing Program continues to expand focusing on lifestyle products such as apparel and accessories, home décor, as well as items for the garage for the auto enthusiast such as automotive accessories, automotive tools, appearance and other automotive related products.
The new NHRA collection can be purchased via the Keyscapers website. 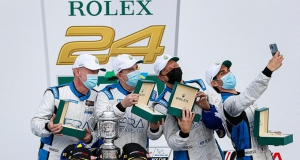 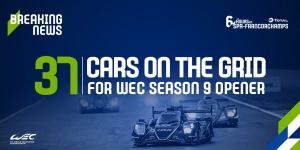 The 2021 FIA World Endurance Championship gets underway in Spa-Francorchamps next month with the Official Prologue and round one of WEC Season 9 which sees a total of 37 cars on the first version of the entry list.

Five Hypercars, 14 LMP2s, five LMGTE Pro cars and 13 LMGTE Am entries make up the impressive roster of teams and star-studded driver names that will compete at the TOTAL 6 Hours of Spa-Francorchamps (29 April – 1 May), which will be staged behind closed doors.

Heralding the start of a brand-new era in sportscar racing will be the headline Hypercar category which will see five cars go head-to-head in the WEC’s premier racing class. Toyota Gazoo Racing has entered two full-season entrants with the all-new Toyota GR010 HYBRID although the driver line-up in the No. 7 and No. 8 cars remains unchanged for 2021.

Meanwhile, US-based team Glickenhaus Racing has entered a pair of 007 Hypercars. Confirmed to drive the No. 708 car will be America’s Gustavo Menezes, while Australian Ryan Briscoe is set to pilot the No. 709 sister car. Romain Dumas, Pipo Derani, Olivier Pla, Richard Westbrook and Franck Mailleux have all been confirmed as team drivers in 2021 but it hasn’t been confirmed which pilots will join which car for Belgium.

French squad Alpine Elf Matmut will enter an Alpine A480 Gibson in the Hypercar category with its trio of drivers who were confirmed earlier this week: Nicolas Lapierre, André Negrão and Matthieu Vaxiviere.

In addition to the 11 full-season LMP2 entries, US-based PR1 Motorsports and triple ELMS Champions G-Drive Racing have entered cars into the ever-popular WEC category. G-Drive Racing’s two Aurus 01 Gibson cars makes it three different chassis constructors competing in LMP2 with the Ligier JSP217 of ARC Bratislava going up against the two Aurus entries from G-Drive and rest of the field consisting of the highly-proven ORECA 07 Gibson. As always, the LMP2 field is one of the toughest classes in the WEC with a string of world-class teams and drivers set to battle it out on track.

Flying the flag for Belgium, and the only home driver on the entry list so far, will be JOTA’s Stoffel Vandoorne who has two WEC starts to his name including two podium finishes at Spa in 2019 and the 24 Hours of Le Mans later that year.

LMGTE Pro will see the category’s key manufacturers – Porsche and Ferrari – go head-to-head for GTE supremacy. AF Corse Ferrari’s No. 52 car sees a driver change for 2021, as Daniel Serra takes to the wheel of the Ferrari 488 GTE Evo alongside Miguel Molina. Meanwhile, Porsche GT Team also sees a driver swap with Switzerland’s Neel Jani joining Kevin Estre in the No. 92 Porsche 911 RSR. Joining the GTE Pro field for Spa will be the No. 63 Chevrolet Corvette C8.R entered by American team Corvette Racing. Antonio Garcia (Spain) and Oliver Gavin (UK) are named on the entry list and will mark the first time the duo has shared a car in their Corvette Racing careers.

Finally, LMGTE Am sees a healthy field of 13 entries, which is made up of five Porsche 911 RSR – 19 cars, five Ferrari 488 GTE Evos and three Aston Martin Vantage AMR cars. For the first time in WEC’s history, a total of six females will compete in this year’s season-opener which includes the three females from LMP2 squad the Richard Mille Racing Team and the all-female line-up entered under the Iron Lynx LMGTE Am team banner.

The official pre-season test, otherwise known as The Prologue, will be staged at the Belgian circuit from 26-27 April with the main event – the TOTAL 6 Hours of Spa-Francorchamps – getting underway on Saturday 1 May. 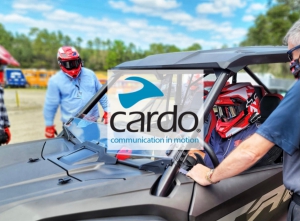 Saturday, Mar 20
Cardo Systems, the global market leader in Bluetooth and mesh communication systems for motorcyclists, was today announced as the official communicator of the 2021 Progressive American Flat Track season. As the official communications system for the series, Cardo’s industry-leading PACKTALK BOLD will be featured as an important piece of equipment throughout the season.
At each race, Progressive AFT officials will utilize Cardo’s industry-leading wireless communicator during its Honda Talon Experience. With Cardo’s Dynamic Mesh Communication (DMC), Progressive AFT crew members can seamlessly communicate with the Honda Talon driver in an ‘always on’ intercom network. The IP67 waterproof and dustproof design of the PACKTALK BOLD provides durability and dependability regardless of track conditions, while sound by JBL provides crystal-clear sound quality when communicating throughout the race.
“Communication is key for race day operations, not only to produce and execute an efficient event, but also for safety of our riders and our trackside staff,” said Michael Lock, CEO of Progressive American Flat Track. “Cardo’s PACKTALK BOLD allows our trackside staff to conveniently communicate with our Honda Talon driver ensuring for safe and efficient transitions and movements both on and off of the racetrack.”
Communication devices are not yet sanctioned for use during competition, but many riders utilize Cardo’s PACKTALK BOLD in preparation for each race. Riders such as 2016 AFT Champion Bryan Smith and fellow Mission SuperTwins racer Sammy Halbert use the PACKTALK BOLD during training for real-time coaching and feedback. Paired with the PACKTALK headset, coaches are able to efficiently communicate and provide real-time tips and suggestions while the rider is on the track.
“Pairing Cardo’s PACKTALK BOLD with my helmet and my team’s headset is super easy and really allows quality practice time,” said Halbert. “By receiving real-time tips, I can make corrections and try new lines without having to stop – greatly improving our practice sessions.”
As the category leader, Cardo offers a wide range of products designed for multiple use cases, including its FREECOM and PACKTALK offerings. The Cardo FREECOM line offers three variations of Bluetooth communication systems. From the rider-to-passenger FREECOM1+, to the rider-to-rider FREECOM2+, and the four-rider Bluetooth system, the FREECOM4+. Rounding out Cardo’s top-of-the-line PACKTALK lineup, featuring Cardo’s proprietary DMC connectivity, is the PACKTALK SLIM and special-edition PACKTALK BLACK.
For more information, visit www.cardosystems.com.
Next up, Progressive AFT roars into Atlanta Motor Speedway for its debut Yamaha Atlanta Super TT. Tickets for the Saturday, May 1, 2021 premiere event are available now at https://store.americanflattrack.com/ebooking/ticket/view/id/3327/#selectTickets. For fans viewing from home, live coverage will be available on any device for only $1.99 a month via TrackPass on NBC Sports Gold.
For more information on Progressive AFT visit https://www.americanflattrack.com.
To score the latest gear for the Progressive American Flat Track fan, visit our official merchandise store at https://store.americanflattrack.com. 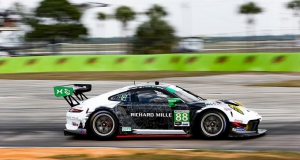 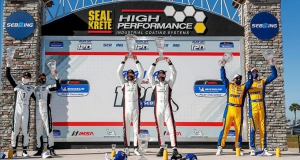 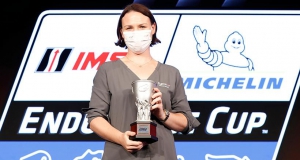 Laura Klauser: Of Cars and Chocolates and Everything GM 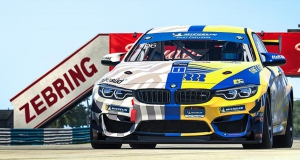 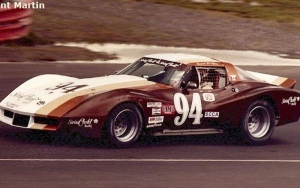 Trans Am Returns to the Charlotte Roval after 21-year Hiatus

The Trans Am Series presented by Pirelli will visit Charlotte Motor Speedway for the third time when the new Trans Am ProAm Challenge debuts during the SVRA Charlotte Speed Tour on March 19-21.

Trans Am opened its 1981 season on the high-blanked circuit with an infield road course. George Follmer made a strong return to the series by leading 27 of the 45 laps in the Cooke/Woods Camaro. However, he was penalized 15 seconds for jumping a restart. Al Holbert was another contender to encounter problems, dropping out with a broken turbocharger.

That opened the door for Eppie Wietzes, who averaged 101.25 mph in a Corvette in the 101-mile race. He was followed by Bob Tullius in a Jaguar XJ-S, Doc Bundy in a Porsche 924 turbo, and Follmer. Current competitor Greg Pickett took 15th in his Corvette.

Trans Am next visited what was then known as Lowe’s Motor Speedway on April 1, 2000. Brian Simo was coming off an unlikely victory in the opening round at Sebring, with Johnny Miller and Leighton Reese both leading on the final lap before crashing.

Paul Gentilozzi captured the pole for the 75-minute race on the 10-turn, 2.25-mile superspeedway/infield road course layout in a Jaguar XKR. Gentilozzi led the opening 12 laps, trailed by Brian Simo in the Tommy Bahama Qvale Mangusta. Stu Hayner then passed both drivers on Lap 13 of 44, with Simo following Hayner to remain second. Simo then passed Hayner on a restart and led the final 18 circuits. Hayner crashed out with 14 laps remaining, with Gentilozzi rebounding to challenge Simo in the closing laps.

Tickets are now on sale for the Charlotte SpeedTour event at www.SpeedTour.net/evetns. Fans not attending the event can follow live Timing and Scoring on www.GoTransAm.com/livetiming starting on Friday, March 19. 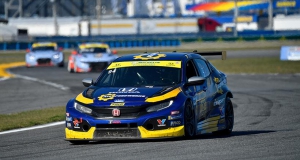 Racer, Podcaster and Salesman, Eversley Does It All