The Trans Am by Pirelli Esports Championship journeyed back in time Saturday, staging Round 7 of the virtual championship on a resurrected Bridgehampton Race Circuit.

The trip was a walk down memory lane for fans as the field of talented racers delivered Trans Am’s signature action-packed racing that saw close competition through the field on the Long Island circuit that played host to Trans Am in the 1970s.

Josh Hurley (No. 03 Jetco Racing/McAleese & Assoc.) went lights to flag, winning the opening round to briefly reclaim the championship lead. But, it was Tyler Kicera (No. 4 Howe Racing Ent/Carbotech Brakes) who won the day after a victory in the final race topped Hurley’s early standings. Kicera now leads the championship by four points over Hurley heading into the finale (394-390 points).

“It was a big day for me,” said Kicera. ““I lost some ground to Josh (Hurley) in the first race, so I knew I had to be super aggressive in the second race, to keep him behind me and try to maximize points. But, we retained the points lead going into Lime Rock. I wouldn’t say I’m comfortable or that I have a cushion, but at least I’m on the right end of it at the moment.

“The track was a lot of fun; very nuanced, so there’s a lot of little things you have to figure out to be quick here,” Kicera continued. “Consistency is the hardest thing, and it’s nearly impossible to pass. Somebody almost has to make a mistake for you to get by.”

After earning two additional points for claiming pole position in qualifying, Hurley started to shake front-row starter Carl Rydquist (No. 46 MyRaceShop.com/Prototype Development Group) about mid-race when Rydquist’s charge slowed as he tried to fend off a charging third-place Kicera.

The battle for second between Rydquist and Kicera quickly became the most interesting duel of the opening round. For laps, the two weaved across the bumpy Bridgehampton surface, Kicera attempting to make a move while Rydquist stifled his progression.

But, Kicera putting the pressure on from behind, only needed Rydquist to make one mistake before he attacked.

Exiting the final turn at the end of Lap 11, Rydquist dropped two wheels into the sand, leaving an opening down the main straight for Kicera to whip out of the tow and to the side of Rydquist. The pair went wheel-to-wheel into Turn 1. Kicera went deep on the brakes and drifted into position before the end of the corner to acquire second place.

“Bridgehampton takes every driver skill there is, it is such a challenging track,” said Rydquist. “I wanted a win and was caught between Kicera and Hurley. When I ran a fraction too wide onto the main straight, I decided to let Tyler go rather than be ruthless. Today was good, I am still improving and pushing for great.”

While Kicera managed to cut Hurley’s lead in half, it wasn’t enough to contest for the lead. Hurley crossed the stripe alone for his fourth victory with Kicera taking second and Rydquist rounding out the podium.

“This was my hardest race yet,” said Hurley. “I’m exhausted! This track is the exact opposite of my driving style. Qualifying ranks up there with my proudest moments in racing – real cars or virtual – because I hated the track and to pull out a good lap like that made my day. The second race I went 10th to third, but unfortunately Archer was between us, and that hurts. So it was a neutral day in the points.”

Archer was fast off the line and quickly took the point to pull a three-second gap from the rest of the field by Lap 4 as Rosseno fell down the order. 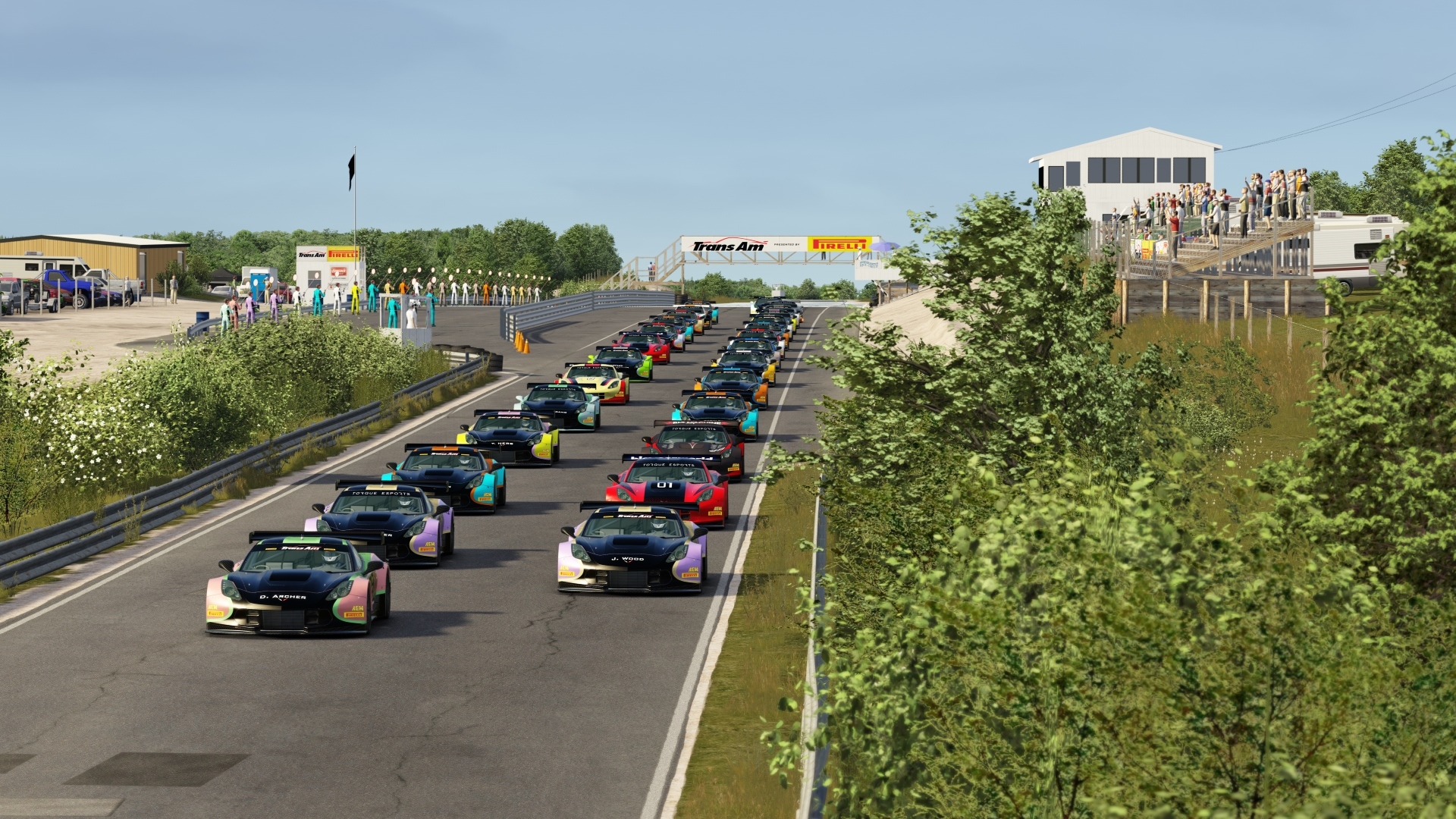 Meanwhile, far behind the No. 32 Archer Brothers Racing car, Kicera and Hurley played off each other to charge from a 10th and 11th place start into the top five by Lap 4.  The pair swarmed second-place DeFrancesco, Kicera to his right with Hurley on his bumper. Defrancesco tried to maintain position as the trio exchanged wheel touches and bumper rubs until Defrancesco’s No. 17 machine was left decommissioned in the woods, ending his day early.

Lapped traffic gave Kicera some breathing room from Hurley on his hunt for first. Setting fastest lap of the race lap after lap, Kicera caught Archer by the final circuit. Archer and Kicera went nose to nose into the Hairpin, Kicera exiting with the lead, taking the checkered flag away from Archer. Hurley finished in third.

“Tyler was on another level today – props to him for being that fast and consistent, he was a better driver today, so he deserved it.,” Archer said. “Bridgehampton was a lot of fun, and it was cool to learn a new track. My dad and uncle (Bobby and Tommy Archer) were able to help me at most of the tracks – like Riverside – but they never raced at Bridgehampton. They didn’t even know where it was. So it was fun getting to learn it along with my dad, and having him coach me.”

While the action up front was exciting, the battle for eighth between Ernie Francis Jr. and Ed Sevadjian was phenomenal. For the entire 10th lap, the two raced side-by-side through every turn, up every hill, down every straight. But sadly the lap came to blows when incidental contact near the stripe sent both drivers skating across the grass, both falling out of the top 10. Sevadjan worked his way back up to a 10th place finish with Francis Jr. finishing 12th.

IndyCar driver Conor Daly finished his Trans Am esports debut with a top-10 finish in the opening round.

The Trans Am by Pirelli Esports Championship will come to a close next Saturday (June 20) at Lime Rock Park. The finale will start streaming at 3:00 p.m. Eastern.

Full replays of the race can be found by downloading the Trans Am by Pirelli app for free: